Posted by Clayton Lessor on Sep 11, 2018 in From Boy to Man, Parenting Tips, Saving Our Sons, The Quest Project, Tips for Moms | 0 comments 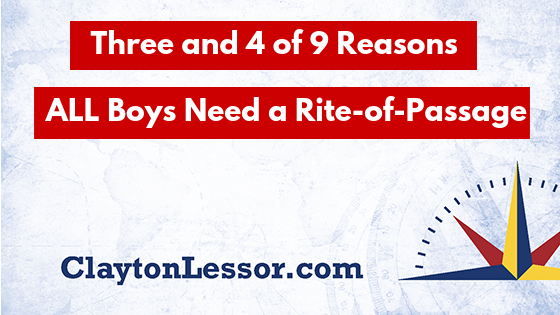 Last week I expanded on what it means when a boy begins to transition to a man and the importance of goal setting.  This week I give more detail on both anger and conflict.  During adolescence a boy begins to self regulate anger and he learns how to resolve conflict.  Teaching, guidance and support is critical.

3.) He’s angry. Anger is a common emotion (mostly due to the hormone testosterone which can cause aggression) for boys 11-18 years of age. Feeling angry isn’t a bad thing, it’s how he’s taught to release it that makes the difference.  Simply telling a boy “don’t be angry” is not effective or an option; “don’t be” messages indicate he’s broken.

Your son needs to learn how to handle his anger.  Anger is an expression of feeling, it’s not automatically a bad thing; it’s a feeling he’s entitled to.  Obviously hitting, yelling, screaming or punching holes in the wall are not appropriate.  Turning anger inward is not a healthy alternative either as that can lead to depression.  Ideally, he learns from dad or healthy male role model how to release anger; that can happen just by him seeing how they handle anger.

I suggest parents of boys to buy their son a punching bag.  This offers a healthy, tactile method to release and vent his feelings of anger.  Getting it out of his body and mind and leaving it on “the bag!”

Saying “don’t be angry” is counterproductive, he’s not broken which is what it implies!    Medicating or anger management doesn’t allow him to get it out, it is “stuffing!”  I recommend getting to what is causing the anger, getting it out in a safe way to relieve it!

4.) Conflict is a part of life, in fact it’s the #1 issue in relationships.  Your son needs to know how to resolve a conflict in a healthy way and find resolution.

Adolescent boys need to be taught to take responsibility for issues that upset them and how to resolve them.  Most of the time the “issue” is with their parent(s).  Families are amazed that when approached correctly how easily a conflict can be resolved.

Basically, in its purest form, it’s understanding that there are two sides to a conflict and it can be discussed more peacefully!

My tip:  In the midst of a conflict, both sides take a 1-hour time out to allow the situation to defuse, then pull out your conflict resolution tool and get to work!

The quickest way to escalate a conflict is “you-ing” someone. It creates a confrontation.  It can feel like an attack when approached this way:

Versus using “I” statements:

Feel the difference?  This applies to ALL relationships!