Posted by Clayton Lessor on Sep 5, 2018 in Boys at School, From Boy to Man, Parenting Tips, Saving Our Sons, The Quest Project, Tips for Moms | 0 comments 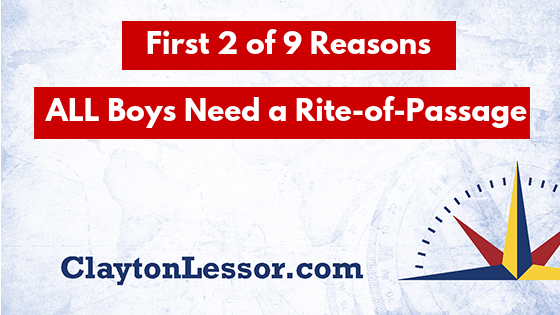 When I wrote the 9 Reasons ALL Boys Need a Modern-Day Rite-of-Passage there was a surge in interest!  That tells me parents of boys are waking up to the critical needs of their sons.  They’re asking themselves-“What’s missing?”  Over the next few weeks, I’ll take those Top 9 Reasons and break them down and expand on each one.

Together, let’s turn this ship around and recognize the importance of a Modern-Day Rite-of-Passage!

1.) Boys begin to transition from boy to man at approximately age eleven. They need a healthy, knowledgeable and responsible mentor, preferably dad, to help them navigate and transition to a responsible man.

As a boy transitions from boyhood to manhood, he begins to transition from needing his mother to learning to stand on his own two feet.  He begins to look for answers to the question, “Who is the man I’m going to become?”  And, he wants (needs) a male role model around to help him figure this out.

Your adolescent son is terrified to leave mom’s side, and he’s being naturally drawn to the new world of men.  It’s the biggest challenge a boy faces in adolescence. He doesn’t want to let mom go but he’s transitioning.  How do you respond?

What he really needs is a healthy male role model to mentor him.  If dad is active in his life that’s great, if not, a healthy surrogate i.e.: good friend or relative that can help teach him the things he needs to know.  For starters:

2.) Young men need goals in their life.  They have an innate desire to set goals which allows them to feel a sense of achievement.  Without a focus they drift.

Boys love a goal, they are hard wired to achieve and thrive on reaching goals.  Start setting goals with him now!  It’s imperative you connect with him on his goals and help to set him up for success. Remember just like playing games, he wants to achieve that “next level” so make sure you help him focus on his next level (goal).   I tell parents to buy a white board; boys love the visual of seeing “where they are and what they’re shooting for.”

Otherwise he’ll drift.  Without a focus he begins to make it up as he goes.  There’s significant risk here.  He’ll turn to peers or try and figure out on his own the man he wants to become.  In my experience that is when it can go downhill!

Next week I’ll cover numbers 3 and 4 of the 9 in more detail.  In the meantime, start implementing these first two with your son!