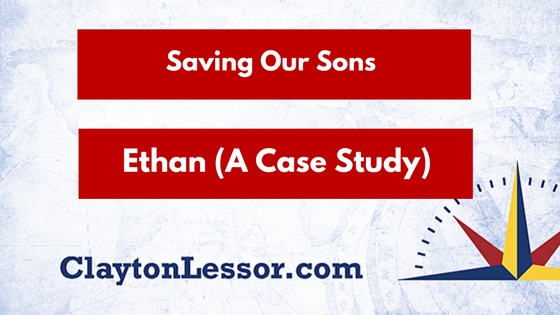 I want to introduce you to a fine young man who worked very hard to overcome his anger. Ethan’s story is one of eight case studies in Saving Our Sons.

The following excerpt is from Chapter 11: Ethan. I hope you find value in this glimpse at the deep benefits of The Quest Project®.

The most difficult week was when Ethan was challenged to get in touch with his anger and then do the scariest thing he could possibly imagine—let it out physically.

Ethan: The hardest thing of all was when we had to open our wounds up to heal them back again the proper way. That was definitely the hardest emotionally and physically, because there’s a part of it where we would have this punching bag, and he would hand you a bat. Put you in your anger zone.

I actually was very scared. I told Clay, I looked him in the eyes and said, “I don’t know if I can control it.”

This was during the Anger Song exercise that I’ve written about in previous chapters. I knew Ethan needed to experience this exercise.

Despite all of those outward expressions of rage that terrified his mother and his sisters, there was even more rage that he was holding inside. And beneath that, there was pain—pain from being raised in a home where he didn’t feel safe, with a father who hurt him. If he was going to get better, he needed to confront that pain.

Ethan: He said, “Trust me,” and I was like, “Okay, I’ll trust you on this. You haven’t failed me yet. I’ll figure this is a good place to trust you.”

Ethan picked up the bat and let go.

Ethan: I got angry at my father because, no offense to him, he was the main reason.

I almost broke the bag.

The experience of being allowed to express anger at his father with no threat of repercussion, being allowed to confront the deepest source of his pain in a completely safe environment, was extremely emotional for Ethan.

Ethan: I came 1.2 seconds from bursting into tears.

The Anger Song exercise is a highlight of The Quest Project®, because most adolescent boys are angry on some level—at being pushed away from their mothers and out into the big, scary world, at the very least. The majority of boys in the program have additional wounds that make the transition to manhood more difficult.

Even the boys who don’t seem outwardly angry benefit from the opportunity to touch their deepest feelings and let their anger out.

As Ethan progressed through the weeks of the program, his mother also learned better ways to help him deal with his anger. A family is a system, and when one part of that system (the boy) changes, the other parts need to change as well. Ethan’s mother needed to learn new ways to deal with her son.

Saving Our Sons was released on September 1, 2016. The book is now available to order on Amazon.com.